A groundbreaking hungarian study to investigate how dog brains process speech has revealed canines care about both what we say and how we say it.


It discovered that dogs, like people, use the left hemisphere to process words, and the right hemisphere brain region to process intonation - wrote the Dailymail.

It found praise activates dog's reward centre only when both words and intonation match, according to the new study in Science.

'The human brain not only separately analyzes what we say and how we say it, but also integrates the two types of information, to arrive at a unified meaning.

'Our findings suggest that dogs can also do all that, and they use very similar brain mechanisms,' said lead researcher Attila Andics of Department of Ethology and MTA-ELTE Comparative Ethology Research Group at Eötvös Loránd University in Budapest.

Andics and colleagues also found that praise activated dogs' reward centre – the brain region which responds to all sorts of pleasurable stimuli, like food, sex, being petted, or even nice music in humans.

Why do dogs scratch their beds before going to sleep?
Have you ever noticed your dog doing a few circles or scratching his bed before falling into sleep? What is the reason of this behavior?

Morning stretch „a lá” dog – why do they do it?
We have all seen our dogs do long stretches after they woke up in the morning, often choosing the funniest positions, ending it with a good body-shake. Let’s talk about the reasons and the explanation.

Dogs Are Like Their Owners? – They Can Be Pessimistic, Too
Optimists are good learners – they always hope for the best. Luckily, the majority of dogs are optimistic. We could say they are actually smart... 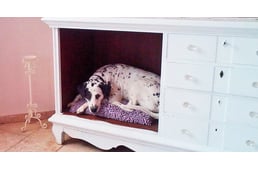