Rowing with you dog? Here’s a great idea

The elderly man transformed his kayak - now his dogs can join him on his adventures. Gorgeous pictures!


David Bahnson (Vermont), former orthopedic surgeon enjoys spending time outdoors - rowing is one of his favourite hobbies. But he wanted to find a way for his beloved dogs to accompany him, so he made up his mind one day and transformed his kayak into a triple kayak. The result is quite incredible!

The two dogs always loved travelling with their owners, by car, on boat and by their plane, too. What about the new kayak? „They seem to love it,” said the 67-year-old Bahnson. „They get excited when we’d pull the kayaks out and see that we were going.” Susie, their first Golden Retriever gave him the idea, when she climbed into the baggage compartment of the kayak. So he put a special ring around its opening, which kept the dog comfortable and protected her from getting wet.

Susie found her place cozy and she really enjoys the ride. When Ginger joined the family, a new idea came into the inventor’s mind. Since there were only two places in the kayak, Bahnson could take only one of his dogs with him, so he decided to install another hole in it, right behind his own seat.

Now it looks like a triple kayak, though only one person can use it, because there’s not enough space for others to stretch their legs out and paddle. But it’s perfect for the dogs! They have never tried to jump out of it. They just sit peacefully in their place and enjoy the beautiful view.

Susie and Ginger are extremely happy to spend more time with their family. “We’ve seen other people kayaking with their dogs, but they usually have them in the cockpit with them. That’s kind of awkward, so this just worked out better,” Bahnson said. With the help of a genius idea and a few tools now the whole family can go on a trip together.

Hiking with your dog – 4+1 reasons to choose outdoors more often
As dog lovers, we usually spend more time out and about than our dog-free fellows. However, it can be hard for most of us to leave our regular tracks due to the lack of time, energy or mood. But it’s always worth going on longer hikes every now and then. 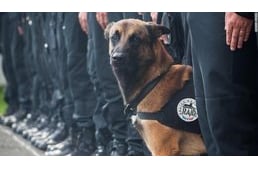 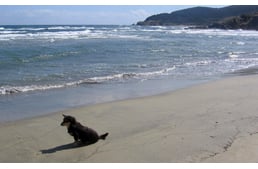