The state has decided to honor its service and working dogs. Their devoted and selfless work is now pawficially recognised.

Service dogs are pups who go through rigorous amounts of training to learn tasks to help people with disabilities live out their daily lives. These tasks can include helping blind people navigate the world, becoming the ears of those who lost their hearing, alerting humans to seizures or other medical emergencies, helping to mitigate the effects of PTSD or dozens of other lifesaving tasks.

The everyday company of a service dog gives more freedom and a feeling of long-lost independence for their disabled owners. They can be any breed of dog, even mutts.

Our loyal furry friends keep an eye on the lives of thousands of people, they protect them in dangerous situations and rescue them during times of natural disasters. New York's decision has brought tears in millions' eyes at the morning the announcement was made. Could it be even better? Sure it can!

New York officials aren’t going to stop at just honoring service dogs, they’re going to honor all working dogs. At the beginning of January 2016, New York decided to recognize every dog who selflessly dedicates their lives to caring for and protecting humans as an official state dog.

"Every day, working dogs protect, comfort and give their friendship and affection to New Yorkers in need of assistance. These devoted companions embody the spirit of New York – hard working, loyal and eager to serve."

Thousands of dog owner rejoiced after hearing the wonderful news! Working dogs deserve as much recognition as pawssible. They help us heal, they help us maintain our independence, they fight crime and in some cases, they give their lives so that we can go on living ours.

High paws to New York for honoring our brave and compassionate furry friends!

Relax with therapy dogs before your flight
International airports in the U.S. and Moscow apply therapy dogs to unstress and cheer up passengers. The method has a wonderful effect on people. 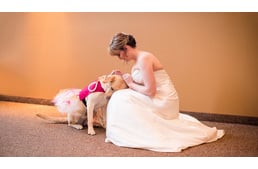